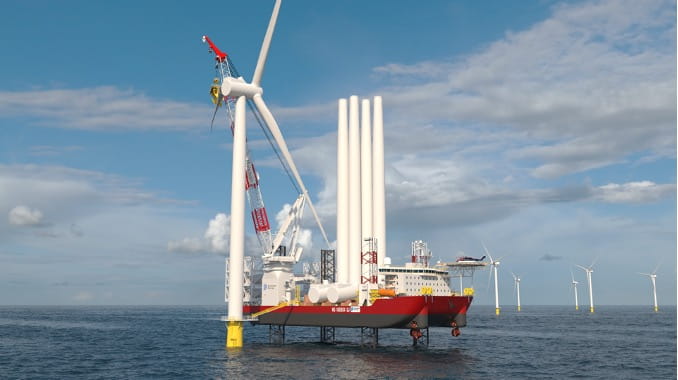 Charybdis, which is expected to be sea ready by late 2023, will first be deployed out of New London harbor to support the construction of Revolution Wind and Sunrise Wind, both under joint development by Ørsted and Eversource, to serve nearly 1 million homes in Rhode Island, Connecticut and New York. Once complete, the two projects will generate more than 1.6 gigawatts of clean, renewable energy.

The charter’s terms will allow the vessel, subject to state regulatory approval, to support construction of Dominion Energy’s 2.6 gigawatt Coastal Virginia Offshore Wind (CVOW) project off the coast of Virginia Beach, which is expected, consistent with prior guidance, to be completed in 2026.

Dominion Energy is leading a consortium of renowned naval engineering and fabrication firms to build Charybdis, which will support thousands of American jobs, assist in the development of a new domestic supply chain for the growing North American offshore wind industry and be fully utilized in support of the installation of offshore wind generation off the East Coast.

The approximately $500 million vessel will operate as part of Dominion Energy’s Contracted Assets segment. Dominion Energy’s regulated customers, including in Virginia, will not experience any bill impact associated with use of the vessel in support of the Revolution Wind and Sunrise Wind projects.

The 472-foot vessel is being constructed in Brownsville, Texas, at global marine shipbuilder firm Keppel AmFELS’s shipyard, using domestically-sourced steel. At peak construction, 1,000 U.S. workers will be employed on this project. Once complete, the vessel will be homeported in Hampton Roads, Va., one of the nation’s premier offshore wind installation harbors, and utilize an American crew.

The vessel's hull and infrastructure will be fabricated with more than 14,000 tons of domestic steel, with nearly 10,000 tons sourced from Alabama, West Virginia and North Carolina suppliers. The vessel is designed to handle current turbine technologies as well as next generation turbine sizes of 12 megawatts or larger. It will also be capable of the installation of foundations for turbines.

For use on Revolution Wind and Sunrise Wind, the vessel will work from State Pier in New London, Conn., another of the nation’s premier offshore wind installation harbors. Utilizing State Pier for wind turbine transportation and installation will employ longshoremen, stevedores, technicians, crane operators, electricians, welders, quality inspectors, and other building and construction trades jobs.

“Offshore wind is critical to America’s clean-energy future and the Charybdis plays a vital role in reaching the Biden Administration’s ambitious goal of 30 gigawatts of offshore wind production by 2030,” said Bob Blue, Dominion Energy’s chair, president and chief executive officer. “We look forward to working with Ørsted and Eversource on the construction of Revolution Wind and Sunrise Wind to continue to grow the offshore wind industry in the U.S.”

“This new, state-of-the-art American-made wind turbine installation vessel is a major milestone for the offshore wind industry at both the local and national level,” said Joe Nolan, President and Chief Executive Officer of Eversource Energy. “As offshore wind continues to grow in Connecticut and throughout the U.S., we are seeing the birth of a new, domestic supply chain that will create thousands of jobs across the country for decades to come. We are proud to partner with Dominion Energy as the first-ever users of this new world-class vessel and bring it to New London to support our work at State Pier and deliver local jobs and economic investment.”

“A Jones Act-qualified installation vessel is a game-changer for the development of the U.S. offshore wind industry,” said David Hardy, Chief Executive Officer of Ørsted Offshore North America. “This investment will enable us to unlock the economic benefits of offshore wind, not just for the Northeast, but for the Southern states as well. We’re proud to partner with Dominion Energy and Eversource on this historic milestone.”

“New York leads the nation with five active offshore wind developments, including the Sunrise Wind project, and the chartering of this historic vessel will play a critical role in not only achieving New York’s ambitious offshore wind energy goals, but our larger efforts to fully combat climate change and drive a robust, clean energy economy that benefits all,” said New York Governor Andrew M. Cuomo. “New York remains steadfast in its commitment to further grow the burgeoning offshore wind industry in the United States and we will continue to work with our regional partners to unlock the enormous potential for green energy to create jobs and build a cleaner future for all."

“As our state and region continues to work towards a carbon-free future, Connecticut is proud to play a central role in the growth of the offshore wind industry and the fight against climate change,” said Connecticut Governor Ned Lamont. “We are excited about the transformation of State Pier into a state-of-the-art facility and the arrival of Dominion's historic vessel in Connecticut to support Ørsted and Eversource’s offshore wind project work, which includes bringing the state its first offshore wind farm in Revolution Wind. All of this activity assists in advancing our state’s clean energy economy and helps position New London as a hub for the industry, delivering jobs and economic development to the city and Connecticut overall.”

“American-built equipment to spur renewable energy for American consumers is a true win-win,” said U.S. Senator Richard Blumenthal (D-Conn.).“Dominion Energy’s first-ever, American-built offshore wind installation vessel for use on a Connecticut project is a landmark moment for the U.S. offshore wind industry, supporting President Biden’s vision for a carbon-free electric sector and American job growth. It represents a generational commitment to the American shipbuilding industry, the domestic infrastructure required to meet the monumental challenges posed by climate change, and American workers. Connecticut looks forward to Charybdis’ arrival at a redeveloped State Pier and the jobs it will support as Ørsted and Eversource bring their projects to life.”

“Connecticut is poised to be a renewable energy leader, and today’s announcement is confirmation that companies see our state as a good partner for wind energy,” said U.S. Senator Chris Murphy (D-Conn.).

“The Biden Administration is prepared to make long-term investments to ensure America is a dominant and permanent force in the global clean energy economy, and eastern Connecticut has a major part to play for us to be successful,” said U.S. Congressman Joe Courtney (D–2nd District, Conn.). “The uptick in offshore wind activity has already brought business and job opportunities to our communities, local suppliers, and other industries through federal grants and public and private investment, and today’s announcement is a signal of all the continued growth and opportunity on the horizon. As Chairman of the Seapower Subcommittee, I’ve worked across the aisle to help make these opportunities a reality—our 2021 Defense Authorization Act clarified once and for all that the Jones Act applies equally to the growing offshore wind sector, and today we’re welcoming the charter of the first Jones Act-qualified offshore wind turbine installation vessel. Glad to help welcome this exciting milestone for our region.”

Among the largest offshore wind developers in the Northeast, Ørsted and Eversource continue to play a unique role in the development of a domestic offshore wind supply chain. Both companies are focused on bringing the economic benefits that come with building a new industry to communities throughout the U.S. East Coast.

Ørsted and Eversource have also committed nearly $100 million to a public-private partnership with the State of Connecticut and Connecticut Port Authority to revitalize the currently underutilized port facility at the State Pier in New London. Approximately 460 construction jobs will be created for the redevelopment of State Pier along with another 100 permanent positions. Furthermore, an $8.2 million federal TIGER Grant to the Connecticut Department of Transportation enabled Connecticut to link the modern national freight network to the port.

The redevelopment project at State Pier is estimated to add millions of dollars in value to the New London economy. In addition, the City of New London and Ørsted-Eversource executed a 10-year host community agreement that brings a guaranteed $5.25 million in new revenue to the city.

About Dominion Energy
More than 7 million customers in 16 states energize their homes and businesses with electricity or natural gas from Dominion Energy (NYSE: D), headquartered in Richmond, Va. The company is committed to sustainable, reliable, affordable and safe energy and to achieving net zero carbon dioxide and methane emissions from its power generation and gas infrastructure operations by 2050. Please visit DominionEnergy.com to learn more.

About Eversource
Eversource (NYSE: ES) transmits and delivers electricity and natural gas and supplies water to approximately 4.3 million customers in Connecticut, Massachusetts and New Hampshire. Celebrated as a national leader for its corporate citizenship, Eversource is the #1 energy company in Newsweek’s list of America’s Most Responsible Companies for 2021 and recognized as one of America’s Most JUST Companies. The #1 energy efficiency provider in the nation, Eversource harnesses the commitment of approximately 9,300 employees across three states to build a single, united company around the mission of safely delivering reliable energy and water with superior customer service. The company is empowering a clean energy future in the Northeast, with nationally recognized energy efficiency solutions and successful programs to integrate new clean energy resources like solar, offshore wind, electric vehicles and battery storage, into the electric system. For more information, please visit eversource.com, and follow us on Twitter, Facebook, Instagram, and LinkedIn. For more information on our water services, visit aquarionwater.com.


About Ørsted Offshore North America
The Ørsted vision is a world that runs entirely on green energy. Ørsted ranks as the world’s most sustainable energy company in Corporate Knights’ 2021 Global 100 index of the most sustainable corporations and is recognized on the CDP Climate Change A List as a global leader on climate action.